Providing safe and secure access and exit from car parking facilities is an important issue for Swedish furniture giant IKEA. When deterioration became obvious on the access ramps at the superstore in Ashton under Lyne, the maintenance team called in car park decking systems specialists Deckmaster to specify a long term solution. 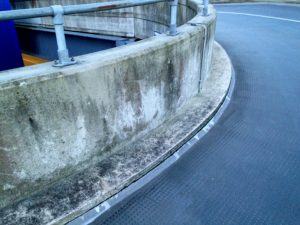 At construction stage, the asphalt on the ramps had been laid as a driving surface and not taken up the kerbs and concrete upstands. As a direct result of normal slight structural movement, the asphalt surface had moved away from the vertical, creating an open crack with the resultant water ingress causing problems.

Deckmaster recommended the use of Deckmaster UVR materials to resolve the issue. Deckmaster UVR is a two-part elastomeric pigmented polyurethane sealer, developed to impart seamless leak protection to areas including exposed car park decks, balconies and roofs. The system offers all the benefits of rapid, one coat application and low odour, with advanced levels of UV, chemical and slip resistance.

The team from specialist car park installers Roadgrip first mechanically prepared the asphalt, then laid and sanded the DPM primer. A membrane was then laid incorporating an emery aggregate to create an enhanced non-slip profile, followed by the application of the UVR sealer. Care was taken to encapsulate the upstands, with the membrane taken right up the vertical to prevent water ingress into the future.

Work on both the upper and lower ramps was completed in two phases to retain access, installing the system on one lane of the ramp followed by the return lane. Once the project was completed, appropriate line markings were also installed. All work was completed on time and to budget.